This subject of guns and Bigfoot can be very controversial. Would someone really want to shoot this creature? Many areas have even passed laws to protect Bigfoot so that it cannot be hunted, even when it doesn't officially exist. And what if it does turn out to be "a guy in a monkey suit". It could result in murder. Another problem is "can Bigfoot really be killed when shot?" Many people in the past claim to have shot at this creature and yet no body has ever showed up. The best advice would be to take a gun with you when searching for this creature, but for protection purposes only. There are plenty of threats out in the wilderness including bears, wolves, and mountain lion. Its best to be prepared. 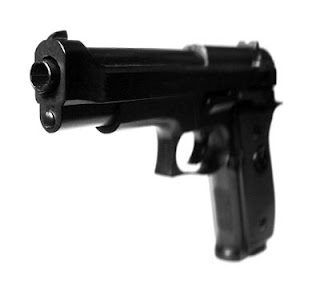 
The Pro-Kill position is basically that it is morally and ethically acceptable to kill at least one animal in order to prove the existence of the creature. Well known supporters of this include John Green, and the late Grover Krantz.


The No-Kill position is basically that it is NOT morally and ethically acceptable to kill at least one animal in order to prove the existence of the creature. This position is the most favorable in the Bigfoot community.


Some areas have gone as far as passing laws to protect such a creature. Here is an ordinance for Skamania County, Washington:

"Skamania County Ordinance Ordinance No. 69-01
Be it hereby ordained by the Board of County Commissioners of Skamania County:
Whereas, there is evidence to indicate the possible existence in Skamania County of a nocturnal primate mammal variously described as an ape-like creature or a sub-species of Homo Sapiens; and


Whereas, both legend and purported recent sightings and spoor support this possibility, and


Whereas, this creature is generally and commonly known as a “Sasquatch”, “Yeti”, “Bigfoot”, or “Giant Hairy ape”, and has resulted in an influx of scientific investigators as well as casual hunters, many armed with lethal weapons, and


Whereas, the absence of specific laws covering the taking of specimens encourages laxity in the use of firearms and other deadly devices and poses a clear and present threat to the safety and well-being of persons living or traveling within the boundaries of Skamania County as well as to the creatures themselves,


Therefore be it resolved that any premeditated, willful and wanton slaying of such creature shall be deemed a felony punishable by a fine not to exceed Ten Thousand Dollars ($10,000) and/or imprisonment in the county jail for a period not to exceed Five (5) years.


Be it further resolved that the situation existing constitutes an emergency and as such this ordinance is effective immediately.


The above ordinance was partially repealed and amended in 1984 by Ordinance 1984-2:


The ordinance was amended to make the crime a gross misdemeanor, punishable by up to one year in the county jail and/or a $1000 fine.


The new ordinance also created a million-acre refuge within the County.
Board of Commissioners of Skamania County"


"I have lived in the woods of northern California and Oregon for over ten years, experiencing the spirit of the forest. The sasquatch knows if a person has a good spirit and those who choose to "go after the bigfoot" with guns, cameras and the thought of making a name for themselves for the purpose of making money and notoriety are approaching this beautiful creature are going about this in the wrong manner. I go into the woods with no weapons and a clean spirit, no cigarette smoking or drugs or cell phones or camera's or bright lights. How would you like it if someone were to shine a bright light in your eyes for their benefit? Or draw a weapon for the purpose of killing these creatures who have been here on earth since the earth has been created? How would you like it if a bigfoot violated your privacy in your backyard and tore you to pieces. These creatures have been mistreated because of ignorance. They are the keepers of the forest and are gentle, yet the west coast bigfoot have been known to throw rocks, and turn cypress trees upside down and plant them back into the earth as a warning for ignorant humans to "stay out" of this area and rightly so. I have had four sightings of these creatures and I know from my mistakes of going for the camera and or a flashlight that they sensed this and retrieved into the fourth dimension. You city slickers do not know how to pour piss out of a boot with the instructions written on the heel, let alone how to respect the forest and just observe with your eyes and enjoy the moment! I do not own a cell phone or gmail or pollute the earth by driving a vehicle and I do not ask permission from any Illuminati gov't official for permission to go anywhere, I just go. Now a days everybody wants to be noticed, it's all about me, well I'm from Queens New York City and have spent fifteen years as a US NAVY DIVER then worked construction for twenty years and finally decided that most humans have an agenda of greed. I try to follow the Buddhist path yet it's not that easy when I harbor hatred for those who want to capture or harm these creatures. The bigfoot will see you if it wants to and sometimes they can be caught off guard just like humans yet I just laugh at these people as fools. I have also seen creek fairies and other entities, and I welcome the day when it hits the fan, I'll be in the woods with the "squash and family" and my love ones while the new world order will be taking people into custody."